What Does TRAVEL Mean on a Mountain Bike: Is More Travel Better? 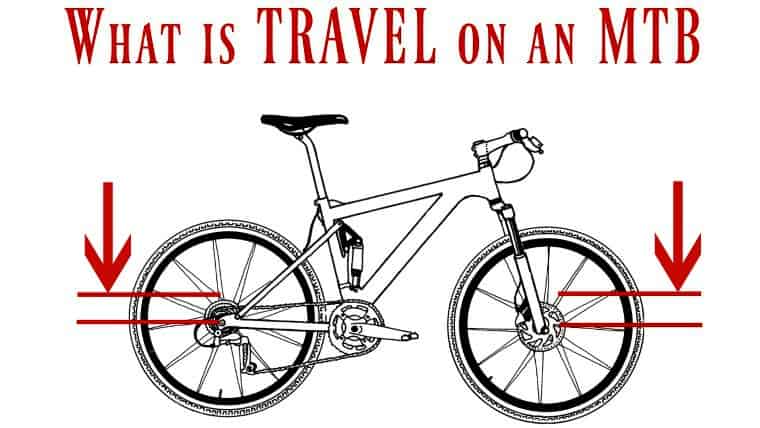 I love riding my mountain bike down steep hills and off of lifts but I have noticed that even after adjusting my current suspension I am bottoming out on relatively small drops. That is why I decided to upgrade my suspension to have more travel distance. In this guide I will explain what that means for various kinds of bikes and suspension set ups.

What is “Travel” on a Mountain Bike?

There are three types of suspension setups that any Mountain Bike might have (I will get into the third later). For right now it is most likely that your bike will either have a “Hard-Tail” or “Full Suspension” setup.

The difference between a hard-tail and a full suspension mountain bike is that on a full suspension bike there is a rear shock absorber as opposed to just the front fork. A hard-tail, therefore, will not have rear suspension components and will simply have a “hard” rear frame.

The differences between hard-tail and full suspension…

Comfort / Downhill Capability: A full suspension mountain bike is going to be much more comfortable to ride and be able to handle much higher drops. Although, this does come at the cost of reduced ability to put power into the trail.

Weight: A full suspension is going to add the components to your mountain bike so by definition will be heavier than a hard-tail

Given this distinction between hard-tail and full suspension mountain bikes the next two sections are going to be split between talking about front and rear suspension components.

Front Suspension and Travel Distance on an MTB

The front suspension, or forks, of any mountain bike is going to be split into a few components. The steerer tube which goes into the center of the crown which branches into two stanchions. These stanchions are what slide into the brace and slider which ends in two dropouts that attach to the wheel.

As I mention before, many riders will upgrade their mountain bikes front suspension by increasing the amount of travel that the suspension is capable of. This is really only done in two scenarios as if it is done without thought then it could actually hamper performance.

Something that is often mentioned on MTB suspension is a “Lockout” I explained what it is and when to use your lockout in another article on this website: What is a Lockout Fork and When to Use It

Now this is where things can get really complicated. This is because there are around five main rear suspension designs that manufactures implement in mountain bikes. They are as follows…

Single Pivot:
In this design the rear shock of the mountain bike is connected to a swingarm by the titular single pivot point located just above the chain rings. This is the simplest rear suspension design and therefore is often the cheapest to manufacture.

The downside of the design is that the compression is going to be consistent throughout the travel of the shock as opposed to some newer designs which increase the stiffness of the rear shock as it becomes more and more compressed to hopefully prevent bottoming out.

Linkage-Driven Single Pivot:
In this design there is still a swingarm connected to a single pivot point. The difference is that there is some kind of linkage which allows the manufacturers to manipulate the compression curve which was previously constant throughout the travel.

Horst-Link / Four Bar:
Put simply, the rear axle of the mountain bike is not directly connected to the mainframe of the bike. This will reduce pedal bob (the bob that comes from the rhythmic nature of pedaling) and will also allow the manufacturer to manipulate the compression arc (amount of force needed to compress throughout the travel of the shock.

Twin-Link / Virtual Pivot Point:
This design implements a triangular design that connects to the mainframe by two pivoting links. This design performs very similar to the Horst-Link but is not patented so is often cheaper to manufacture.

High Pivot:
This is the same as the single pivot with the exception that the pivot point is placed much higher on the frame. There is also the addition of an idler pully which routs the path of the chain above the pivot point as to eliminate what would otherwise result in extremely high levels of pedal bob.

The Rear Shock and How it is Sized

Furthermore, the rear shock attaches to the frame of the bike by two eyelets which is actually how they (the shocks) are sized. Although, the same style shock is used no matter the design of your rear suspension.

To find the eye-to-eye distance measure from the center of one pivot eyelet on the shock to the second one. This distance is the eye-to-eye length that you must use to find correctly sized rear shocks for your mountain bike.

Using shocks with incorrect eye-to-eye lengths can cause problems with the efficiency of the suspension and even can cause it to work against you.
The travel on a rear shock is therefore more restricted although can vary slightly as the compression chamber can be of slightly different sized even if the overall length must be the same.

Just as with the front shock the longer the travel the better the shock will be at absorbing force, and the worse it will be for riding your mountain bike uphill (putting power to the trail).

Balancing the amount of force that the front and rear suspensions on a full suspension mountain bike is crucial to getting the most out of said mountain bike. If one component is compressing slower or faster than the other then the comfort of the ride can be dramatically compromised. As can the overall effectiveness of the suspension system.

It is not essential that the front and rear suspensions have the exact same amount of travel although the closer they are the easier it will be to balance them. Balancing them involves adjusting the pressure inside of the chambers so that each shock, no matter the travel, bottoms out at the same time. A longer shock will need less pressure when paired with a shorter shock and vice versa.

There are two main kinds of suspension. Those which rely on springs to compress and those which rely on compressed air. The benefits of an air shock are that it is lightweight, easily tune-able, and naturally get stiffer near the point of bottoming out. The downsides are that they require more maintenance and are also not as responsive.

The reason why some rider chooses coil springs, even though they must be bought specific to the weight of the rider and are also heavier, is that they are extremely responsive. Additionally, coil springs don’t fade in stiffness when riding for long periods of time as some air coils will.

The third, and most uncommon, form of suspension on a mountain bike is… well… to not have one at all. On a rigid bike you will not find either a front or rear suspension system and rather just a solid frame comprising the entire mountain bike.

Rigid suspension systems on fat tire bikes are able to be implemented due to the natural suspension capabilities of having such a large tire. This larger tire works to absorb force and the low pressure you can ride at work to smooth out the ride as well.

Some regular tire mountain bikes implement a rigid style suspension system although they are much less comfortable to ride and require a more experienced rider. These bikes can provide a great experience if you’re constantly going uphill and don’t plan to encounter any rough terrain.