What is a Lockout Fork on a Mountain Bike: Why it’s Nice! 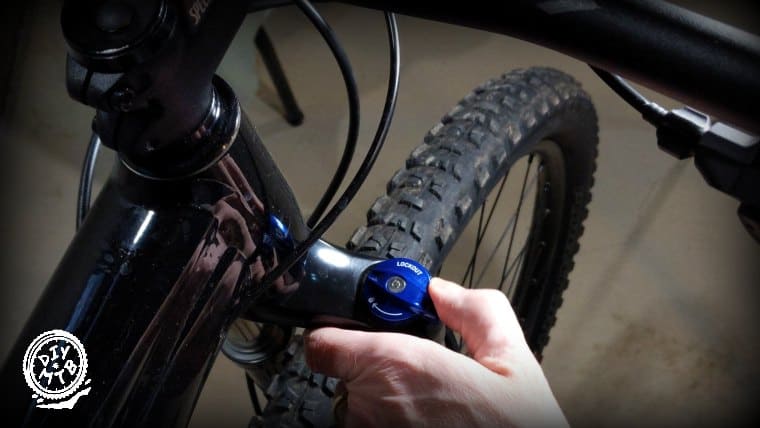 When I heard that I could use a Lockout to stop my front suspension from compressing with ease, my first question was… Why do rigid bikes even exist then? This article is to help explain what the purpose of a lockout fork is and why you might want one.

What is a Lockout Suspension on a Mountain Bike Fork?

A lockout is a small switch placed atop the front right stanchion of your mountain bike’s suspension which when engaged decreases the low speed compression rate of the front fork, adjustable to the point of being fully rigid. This switch can also be routed to the handle bar.

What is the Advantage of Having a Lockout Suspension on a Mountain Bike?

Mountain Biking Pro Tip: Make turning the front fork lock out ON whenever switching from rough tails to smooth surfaces. More of your energy will be applied to moving the bike forward.

The disadvantage to having a full suspension (or front suspension) is that when riding the mountain bike on pavement or uphill there is a great deal of energy that is being absorbed by the suspension. This can make it much more difficult to scale steep inclines or get up to speed easily.

The disadvantage, then, is that a hardtail mountain bike will not be particularly comfortable to ride if the terrain is at all uneven and will be especially difficult to withstand when going downhill. Any sort of drops will be extremely punishing and large drops are almost impossible to land. Without the only good use for a mountain bike is as a road bike unless you are a particularly experienced rider.

It would seem then that if you want to ride on a wide range of terrains and inclines (or declines) then it is necessary to either put up with a difficult and punishing experience half the time or buy two bikes. Of course, neither of these options seem attractive to either your body or your wallet. It is for this exact reason that the lockout fork was invented.

With a lockout fork a full suspension system can be utilized when riding downhill and on rough terrain. With the flip of a single switch the suspension can be made more rigid for riding uphill or on pavement. Additionally, with newer lockout systems by both Rockshox and Fox are adjustable to the tune of three different levels of lockout. An option which does not decrease the low speed compression rate at all, a middle option which simply makes the compression more rigid, and a fully-locked out mode which eliminates travel all together.

Fox Factory is the patent holder for the “Lock-out” technology. Interesting to read all about the science and innovation – HERE

The rebound dial on the Rockshox is conveniently labeled with a tortoise and a jackalope to indicate the directionality of the dial. The farther towards the jackalope the quicker the shock will decompress. The rebound dial on the Fox is a bit more complicated as it initially seems counterintuitive. It is labeled with a plus and a minus which indicate the amount of rebound suppression that is applied. The plus means more suppression; therefore, the shock will be slower to rebound. The minus means less suppression; which indicates a faster rebound.

Suspension is Fun to Talk About

What is a Remote Lockout System on a Mountain Bike?

A remote lockout system is a lockout fork which can be controlled by a dial placed upon the handlebar of the mountain bike. The advantage of a remote lockout system is that it isn’t necessary to get off of the bike to engage the lock. On a variety trail, with lots of ups and downs, this can be really helpful. These can even be installed for rear shock lockouts.

Is a Rear-Lockout System on a Mountain Bike Useful?

On a full suspension mountain bike there is, of course, not only a front fork but also a rear shock. Just like on the stanchion of the front fork a lockout can be applied, a rear shock can also have a lockout capability. These lockouts also utilize a three-step dial to adjust the low speed compression and a rebound adjustment.

How a Lockout and Rebound Adjustment Works on a Mountain Bike

The lockout and rebound systems work by using pressurized oil to change the speed of compression and decompression. A completely disengaged lockout will allow the oil to flow quickly through the chamber while a fully-locked suspension will completely restrict the flow of the oil. The same goes for the rebound system although instead of using positive pressure uses negative pressure to affect the decompression rate.

Do Real Riders Actually use a Lockout Suspension?

While a lockout suspension, on paper, seems to be an amazing invention it does cost some money, so if it is not really worth it then I understand why most riders might not look for it on the next bike they buy. So, to answer this question I looked through one of the most popular mountain biking forums about lockout suspensions and surveyed the results.

Here is a count of how many riders actually use their lockout.

It seems then that there is an almost even divide between people who do use it and people who do not. At first this confused me but after reading further into the post on this forum it became clear to me why so many people weren’t taking advantage of their lockouts.

For many people the number one problem with using their lockout on their mountain bike is that they forget to turn it off. This of course can be a problem if it is engaged during a rough decent and even worse if there are a few drops along the way. And while the immediate reaction of many people may be that this is completely the fault of the rider, it is something that many people experience and so if you think you might be one of these people then maybe a lockout will not be useful for you.

The second most common complaint about the lockout is that the rider didn’t notice much of a difference no matter how the lockout was adjusted. It is true that if you have a mountain bike with a low travel distance in the first place then a lockout might not offer you a great deal of improvement in regard to power transfer into the trail.

But, interestingly enough there was one constant sentiment expressed by the riders on this forum and that was the fact that a lockout is much more useful when it has a remote dial that can be switched from the handlebars. It seems that the inconvenience of having to stop riding and get off the bike to adjust the suspension discourages most riders from caring enough about their riding comfortably to actually use it.

The conclusion I came to, then, is that to make the price of a lockout on a mountain bike justifiable there are a few conditions that must be met. First, you must get a remote lockout. Secondly, unless you ride in an area where there is a lot of different terrains and inclines then a lockout might not be very useful. Lastly, to justify a lockout the rider must care about the comfortability of their experience and not simply just power through every tough climb and probably doesn’t like to switch gears often either.

The short answer is… No. Every style of mountain bike has its purpose and has been manufactured specifically for a certain purpose. A full suspension mountain bike is made for rough, tough, terrain. A hardtail is made for uphill climbs and smooth flat trails. Yes, a lockout can definitely mimic the feeling of a hardtail but there are some big differences between them. A suspension system adds weight to the bike and also adds parts that need to be repaired and maintained.

However, a full suspension with a lockout system and a rebound adjustment dial is possible the best form of downhill trail bike. It’s great at what it is meant for but can still help you out when you’re going uphill or riding on pavement.

Learning about Mountain Bike Tires could take years. Let me help you just a bit quicker with some articles.