Can I Still Ride My Mountain Bike if I Have a Broken Spoke? 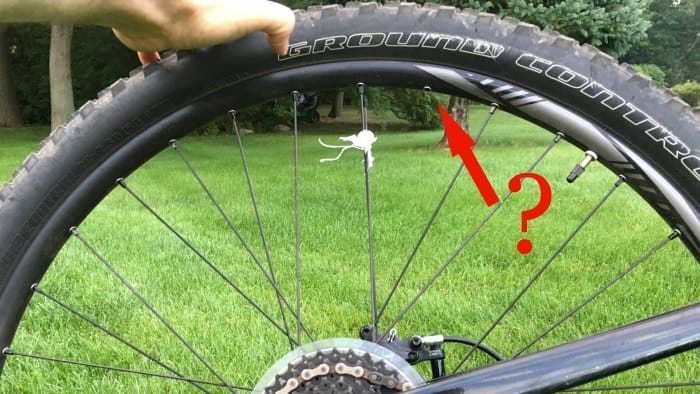 Before my last ride, I was lubing my chain and noticed I am missing a spoke.  I don’t know when I lost it, but It caused me to wonder if I could ride if I am missing one spoke.

You can technically ride with a broken/missing spoke, but it is not ideal.  The missing spoke is going to put pressure on the others, and it will cause bigger problems if you don’t replace it.  If you are already on the trail, ride on, but if you are home and notice a broken spoke, you should replace it before you ride again.

How do I know if I have a broken spoke?

You might hear it break, especially if you hit something or do something that you knew put stress on your bike.  However, if you are pedaling through the woods and in the zone, you might not hear the break.

If you don’t hear it, you will probably know you have a broken spoke because your wheel will be wobbly.  You need to assess immediately if the spoke has totally broken off, as it could cause more problems to continue to ride if it is hitting other components.

What exactly is a spoke/what is its function on the mountain bike?

A spoke is thin and pliable, but when put under tension with the other spokes, it supports a great deal of weight and does not bend as easily. The spokes also help keep the wheel true, which means straight and round.  It’s like a car being in alignment.  If it is off, many more problems can occur.

The rim is pulled in by the spokes.  Tension between the hub and rim is even all around, which makes the whole thing more flexible; this allows it to withstand the shock of typical mountain biking. All of this distributes your weight, which is important to make the bike function properly and give you the best riding experience.

The more spokes a wheel has, the stronger the wheel should be because the weight is spread around.  Fewer spokes means a lighter wheel, so some custom wheels go with this look if a customer cares about weight.

“A spoke nipple holds a bicycle wheel’s rim to each spoke. The spoke nipple is a headed cylinder with threading on the inside through part of its length (there is an unthreaded lead-in nearest the ‘flats’)” (https://en.wikipedia.org/wiki/Spoke_nipple)

How often should I check for a broken spoke?

Ideally, you should check before/after every ride.  But, you and I both know we don’t always perform the required maintenance checks as often as we should.  Maybe every time you lube your chain, just “flick” the spokes to see how they feel/check the tension.

This is another good reason to take your bike in to a mechanic twice a year.  I typically do a spring and fall overall maintenance.  The mechanic will check for loose spokes and let you know about the overall health of the wheel.

What causes a mountain bike spoke to break?

The most common cause is just every day wear and tear.  You are riding a mountain bike, after all.  Hopefully, you are riding often and through rocks, sticks, gnarly stuff that puts stress on the wheels/tires/spokes.  Eventually, the spokes just wear out.

The spokes wear against one another, become thin, and eventually break.

The spokes could break because the tension is wrong on the bike (too much/too little).  This is another good reason to cultivate a relationship with a local bike shop.  They can advise you about your wheel situation and what is best in terms of spoke tension.

More rare are objects that break spokes on the trail—a rock, branch, etc.  This does not happen often because spokes are stronger than they look and absorb a good deal of trail elements without breaking.

Why should I avoid riding if I have a broken spoke?

You could ride out of the trail and possibly do a short ride with a broken spoke; however, the problem is that it puts additional stress on the other spokes, which can cause them to break as well.  It can also make your tire wobbly—out of alignment.

If you know you broke a spoke on the trail, just make sure it is secure and not flying around causing other problems.  Carry some tape with you in your pack—remember, Duct Tape fixes everything!

Also, be careful not to ride too hard with a broken spoke—avoid big features and major bumps, as this could break more spokes and/or cause a problem with your wheel not being true.

Can I replace a spoke myself?

Of course!  You can do almost anything yourself in terms of mountain bike maintenance; you just need the right tools.

Here are the steps to replacing a broken spoke:

It’s not impossible to put on a new spoke and true a wheel, but if you are a beginner with no mechanical experience, you will probably want to take it to your local bike shop for the repair.

If I take it to a bike shop, how much would it cost to replace a spoke?

The good news is that this is one of the cheapest fixes on a mountain bike. The spoke itself costs a dollar or two, and it should only take about 30 minutes of labor for the mechanic to fix the spoke.  This is probably worth it for the beginner.

Are there different kinds of spokes?

If you are an occasional rider who does not want to spend a lot on a spoke, a basic spoke is for you.  Most bikes use these, and they are fine.  Especially for a beginner, you won’t notice the difference between this and a higher-end spoke.

If you want something a little lighter and something that will last longer, the butted spoke is a good choice.  If you get a high-end wheel, you should look into a butted spoke.

Aero spokes are the top quality and are used on the fastest wheels.  These would be used on high-end wheels and probably would be your choice if you are interested in racing.

For most of us, the basic spoke is the best choice, but ask your bike mechanic or mountain bike friends for advice.

Broken spokes do not (or should not) happen very often.  If you start to have a problem, you should have a professional look at your bike.  It could be that the wheel is not true, and the pressure of being out of alignment is causing pressure on the spokes.