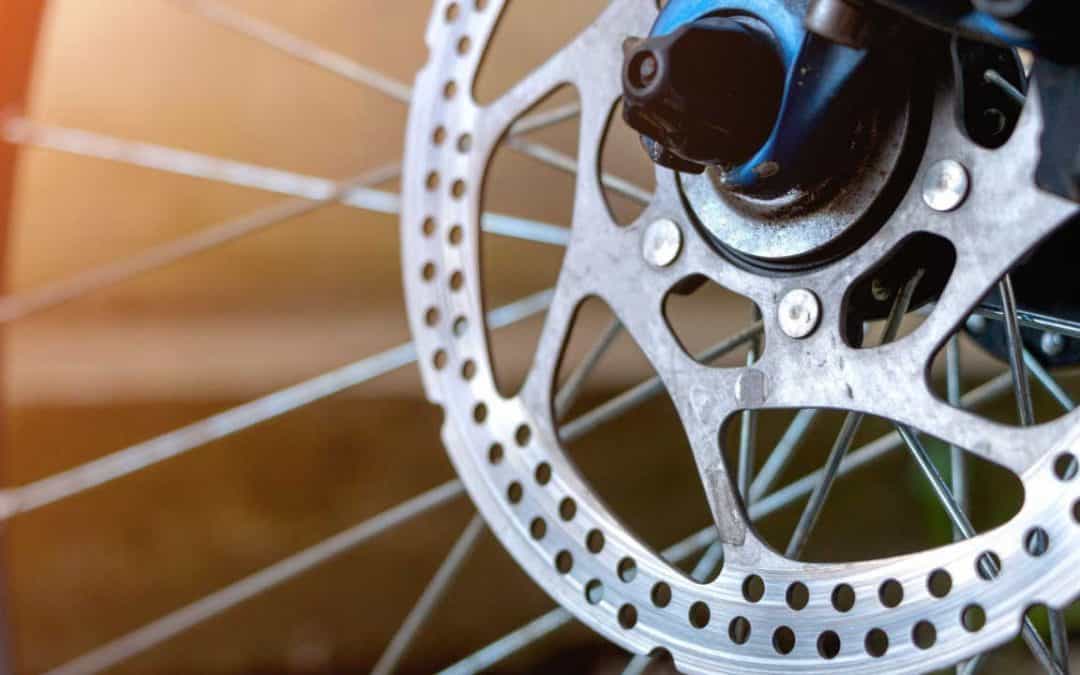 One of the most significant areas of misinformation and confusion about mountain bikes is the braking system. There are two primary choices: V brakes and disc brakes. To choose which one will work for you, you need to understand how these two differ.

The significant difference between V brakes and disc brakes is where they apply force. The calipers of V brakes use pressure to the outer edge of the rim to stop the bike. Meanwhile, disc brakes work by moving the braking system away from the rim going to a rotor.

These differences will help you determine which brake type will fit your mountain bike. In addition, you must know what the advantages and disadvantages of these two braking systems are.

With the addition of disc brakes in the professional mountain bike models today, there is an ongoing debate between V or rim brakes and disc brakes. A lot of bikers are confused with how these two differ from one another. People are also asking if upgrading their braking system to disc brakes is worth the investment.

Basically, V brakes have been the standard braking system on most mountain bikes for many years, decades even. Shimano started using them in their XT and XTR lines back in 1996. However, the linear-pull, cable-actuated braking system known as V brakes has been around considerably longer in different forms. This braking system is simple yet effective, which is why it has worked for so long.

When you activate the brake, you increase the tension on the cables running from the hand levers to the bike’s wheel. As a result, the caliper around the bike’s rim closes on the rim itself.

Brake pads on the caliper produce friction, which is responsible for stopping the bike from moving.

The force to stop the bike is applied by clamping the wheel’s outer rim. Therefore transferring stopping force through the spokes and central wheel hubs to the bike frame itself.

On the other hand, disc brakes are the solution for mountain bikers who are already tired of cleaning the mud and dirt that clog to their rim brakes. So, manufacturers started offering discs on all bike types.

The idea of clamping part of the wheel is similar; however, this time, it’s a rotor near the axle and mounted to the axle centrally, rather than clamping on the outer rim itself. Therefore a different transfer of stopping power occurs originating at the wheel hubs via the rotor instead of the outer wheel rim.

When it comes to forming and function, you can think of motorcycles or cars as examples. Rather than acting on the wheel rims, the brake pads of disc brakes squeeze a metal rotor or drum attached to the wheel’s hub.

Moreover, there are two types of disc brakes that you can choose from upon purchase. The first is a mechanical brake, and the second is hydraulic.

Mechanical disc brakes use a cable-tension system similar in function to V brakes, to operate and activate the caliper.

On the other hand, hydraulic brakes do not use classic cables. Instead, this braking system has a master cylinder that triggers the brake fluid through a hydraulic line when you pull the hand lever.

The pressure pushes the brake fluid into the caliper, which causes the brake pads to push against the rotor. As a result, the bike stops.

Here are the critical differences between rim and disc brakes:

The significant difference between V brakes and disc brakes is where they apply force. As mentioned above, if your bike has V brakes, the calipers apply the stopping power to the rim’s outer edge.

On the other hand, disc brakes move the braking surface away from the rim and bring it to a rotor. The rotor is attached to the hub, while the caliper connects to the fork located near the axle.

Such a design is more common on a motorcycle brake. In fact, mountain and cyclocross bikes utilize this braking system for years because there is a more negligible risk for mud to clog the calipers.

Actuation of the Braking System

Rim brakes utilize a cable system to close the caliper on the rim. On the other hand, disc brakes often use hydraulics (although cheaper versions still use cabling).

When you grab the levers, they will build fluid pressure. As a result, the pistons inside the calipers move toward the rotor. This move generates friction, causing your mountain bike to stop. (source)

Disc brakes cost more than V brakes. The cost difference applies not only to the initial price of purchase but also to maintain. But the investment is worth it because disc brake pads will last longer than V brakes.

I bought some hydraulic disc brakes for a rebuild on my son’s MTB. These weren’t the cheapest disc brakes at $130, but they were far from high end disc brakes in terms of price. I’ve had great luck personally with the TEKTRO brand and recommend them. These prices were a while ago, but use this link to check reviews and prices. TEKTRO MTB Disc Brakes

Below you can see the price I paid for a set of V brakes. For less than $30 you can get some brakes on Amazon. I’m using these brakes for a MTB “rebuild” I’m doing.

However, disc brakes cost more in terms of replacement. In fact, the price can be three times as much as the cost of V brakes. (source)

If your looking for some cost conscious v brakes to get a used bike stopping, here’s a Link to Amazon V Brakes

Rim and disc brakes also differ in terms of how they work in different weather conditions.

Disc brakes provide a more responsive and consistent stopping force than rim brakes. In addition, this braking system removes the annoying sound of a gritty wet pad whenever it meets the wheel rim.

More than that, the stopping power of discs brakes indicates that it applies less force at the lever. For this reason, it relieves muscle strain and fatigue, especially when you are biking for hours.

With disc brakes, you will typically be able to run much broader. Meanwhile, V brakes only allow a more narrow tire as it must clear the brake pad arms mounted to the fork and frame.

Meaning, disc brakes provide a bigger tire footprint, thus allowing the bike to use lower tire pressure or wider tires. For this reason, you will experience more comfort and traction with disc brakes than V brakes, typically speaking.

Most bikers admire V brakes due to their simplicity. The reason is that it does not let them down when it comes to reliability. V brakes are also easier to fix than disc brakes in case it acquires damage.

However, other bikers find disc brakes sturdier than rim brakes. They are also more reliable in general. But compared to V brakes, disc brakes are slightly more challenging to fix when it acquires damages. (source)

The Pros and Cons of V Brakes

V brakes are so simple that you do not need to do anything with them unless there is damage. Regardless of the technological advancement that bicycle brakes had, V brakes stayed simple.

Additionally, V brakes are the standard system used around the world. For this reason, it has an advantage compared to other braking system options for traveling cyclists.

Since V brakes are simple, bikes that utilize this braking system are affordable. V brakes are also easy to maintain, so you will only spend less money in the long run to keep their structural integrity.

Rim brake parts and their operation are easy to understand. For this reason, this braking system is easier to maintain and repair in comparison to a more advanced setup.

Since rim brakes have a basic operation, they also have fewer parts that potentially add to the overall weight of your bike. True enough, lighter bikes do not always mean better performance. But if you seek to shave weight, you need to look for this feature.

However, you should note that cheaper systems often mean heavier components, so in some cases, V brakes might be heavier than high-end disc braking systems or vice versa.

V brakes cause the calipers to pinch the outer edge of the wheel rim, allowing you to see when your wheels need truing. For instance, if your rim rubs either of the brake pads while you are rolling along, that indicates that you have a wobbly wheel.

When cycling on steep and hilly descents, it is essential that you can quickly alternate brake pressure and release it. Unfortunately, such is something that V brakes cannot do. They have sloppy braking compared to disc brakes.

Prone To Wear And Tear

All the friction that V brakes generate from braking damages the rims. As a result, rims gradually corrode or warp. Similarly, the pads wear quickly, reducing the surface area of the rim that is touching the brake pads.

Due to where rim brakes apply pressure, wheel rims can quickly heat up and even warp. This factor increases the risk for blowouts, especially when riding downhill. Meanwhile, disc brakes remove this issue as it is not affected by slightly warped wheels.

Disc brakes are more complicated and have more parts. For this reason, they are more expensive to purchase, maintain, and repair than V brakes.

Pads Can Be Touchy For Adjustment

Disc brakes are much more precise. For this reason, adjustments can be touchy. A disc brake can go out of adjustment with only a minor change to the adjustment screw. V brakes have more flexibility for adjustment error, but as mentioned, will require more adjustments than a disc brake.

After reviewing both braking systems, I’ve found that I prefer v brakes on my dirt jumper and trick bikes like my BMX. But when I go on a single track, downhill, or even cross country, I vastly prefer using my bikes with disc brakes. What do you prefer and why? Let me know in the comments below.