What is the Difference Between a Hybrid Bike and a Mountain Bike? 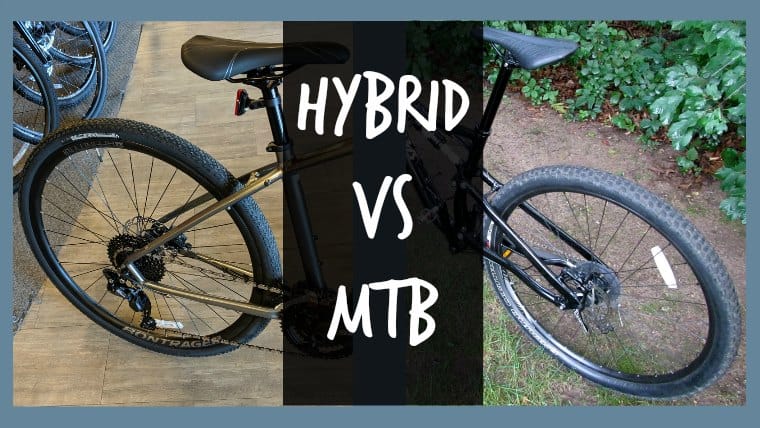 As much as it pains me to say it… I use my mountain bike more for commuting than actual trail riding. So, I was wondering if a hybrid bike might be better for me. This article will explain the difference between a Hybrid Bike and a Mountain Bike and who each type of bike is for.

The Difference Between a Mountain Bike and a Hybrid Bike

Hybrid bikes have narrow road friendly tires, a frame geometry that is more upright compared to a mountain bike. Hybrids typically have front suspension but no rear suspension to allow attachment of racks, bags and fenders. A mountain bike will be constructed with larger frame tubes, wide tires with aggressive treads and usually suspension in both the front and rear wheels.

What is a Hybrid Bike?

A hybrid bike is exactly what it sounds like, a blend of both road bike and mountain bike characteristics. All of this, of course, in an effort to create the perfect combination of the two. A bike which can be used for both commuting and trail riding.

The Specific Differences Between a Mountain Bike, Hybrid Bike, and Road Bike

The Frame on Mountain, Road and Hybrid Bikes

A Road Bike needs to be lightweight as to allow easy acceleration and maintenance of velocity. This is why road bikes are commonly made from aluminum which is weaker than steel but much lighter. Although, some high-end road bikes take advantage of carbon fiber to become bewilderingly light for their level of durability.

Hybrid Bikes take design cues from mountain bikes but material guidance from road bikes. As I previously mentioned, Hybrid bikes have flat handlebars which are better for trail riding but worse in reference to comfort. Although, hybrid bikes are almost all made out of an aluminum alloy which is chosen for its lightweight but strong composition. Additionally, the frame of a hybrid bike will often have the necessary eyelets and braze-ons necessary for the addition of paniers.

The Tires – What Separates Hybrid, MTB and Road.

On a mountain bike tires come in three main sizes. 26-inch, 27.5-inch, and 29-inch. These are usually outfitted with an aggressive tread pattern meant for optimal traction and power transfer into unstable ground. The most popular with avid mountain bikers is the 29-inch size which provides a high level of clearance and easier hill climbing ability. Moreover, these tires are usually thicker in relation to road tires for the same reason.

Road bike tires come in variety of sizes but most commonly in the 700c designation. This name comes from the older French wheel sizing denotations but which means that they are about 27.5 inches in diameter. Road bikes use smooth, thinner, tires which give benefits in both ease of acceleration and the maintenance of speed.

Hybrid bikes usually come in the same 700c size but come in a myriad of tread patterns. The most popular options are those which compromise between smooth treaded tires and mountain bike knobblies. Some hybrid bikes that are geared to be more like mountain bike, as opposed to road bikes, will come in the 26-inch size.

The Drivetrain – Gearing Best for the Biking Conditions

Mountain bike drivetrains are a collection of derailleurs along with a bulky cassette and chain wheel setup. This allows for a large gamut of gears which can be periodically flipped through to make hill climbing and acceleration easier dependent upon the gradient of the terrain or the stability of the terrain.

Check out the author Ruben’s about page HERE.

The Brakes – Stopping a Bike in All Conditions

Road bikes have historically had a wide range of braking systems although recently have become more uniform. Today, road bikes almost all use rim braking systems or specifically engineered road bike disk brakes. These brakes are meant to slow down a bike at high speeds safely.

Hybrid bikes have always taken from mountain bike design for their braking systems. This means that a hybrid bike will have either disk or v-brakes. This is useful for non-road use but doesn’t really impact road use much.

The Suspension – Cushion for the Bike Rider

Mountain bikes come with large front forks that provide high amounts of travel and impact absorption. Some mountain bikes even come with a rear suspension system, these bikes denoted by the name full-suspension. Necessary for comfort on the trial this high level of impact dampening also makes it more difficult to get power from the pedal into the ground.

If you’d like to read a little bit more about MTB Suspension Travel, read this article I wrote: What is Mountain Bike Travel: Is More Better?

A road bike will almost always come with no suspension, some call it a rigid bike although some mountain bikes are also like this. These bikes have no need to dampen any bumps or drops and so they are instead optimized for speed. Having a rigid frame allow the maximum amount of power transfer into the ground.

Can You Use a Hybrid Bike for Trail Riding?

If a hybrid bike couldn’t be used for any off-road riding whatsoever then they would be effectively useless. The idea with a hybrid bike is that while it may be more difficult to ride on the trial you can still do it. Of course, along with the comfortability and speed advantages when it comes to use on the road.

I wouldn’t recommend and serious downhill riding with a hybrid bike but it will definitely be able to handle the trails at your local state or metro park. This means that if you mostly use your bike for road use but occasionally want to go on some trials to have fun, you can.

However, in terms of road use, a hybrid bike will be great. Unless you’re into racing or other performance-oriented activities, a hybrid bike will offer a comfortable a fun road experience. The level of which is dependent upon the sway of your Hybrids design. If it is more trail oriented then it will be slightly more difficult to use on the road but not extremely noticeably. If your hybrid is more road oriented then you will enjoy the benefits of lower weight and faster speeds, although a slightly lower ease of use on the trail.

Who Should get a Hybrid Bike?

As I’ve hinted at throughout the article, a hybrid bike is good at a lot of thing but not really great at any of them. It is for this reason that a hybrid bike isn’t meant for anyone who is really serious about either road or mountain biking. Instead, a hybrid bike is meant for someone who needs a bike which can do both types of riding because they can’t afford to get two different bikes.

Moreover, a hybrid bike can be used as a good introduction to mountain bike for new or younger riders. If you just want to get your toes wet and try it out, or simply don’t have the money right now to get a decent mountain bike then a hybrid can be a good option in the interim. This is especially true for younger riders who might soon outgrow their bikes as they get taller and weigh more.

The Pros and Cons of Each Style Bike