When To Bleed Mountain Bike Brakes (and Why) 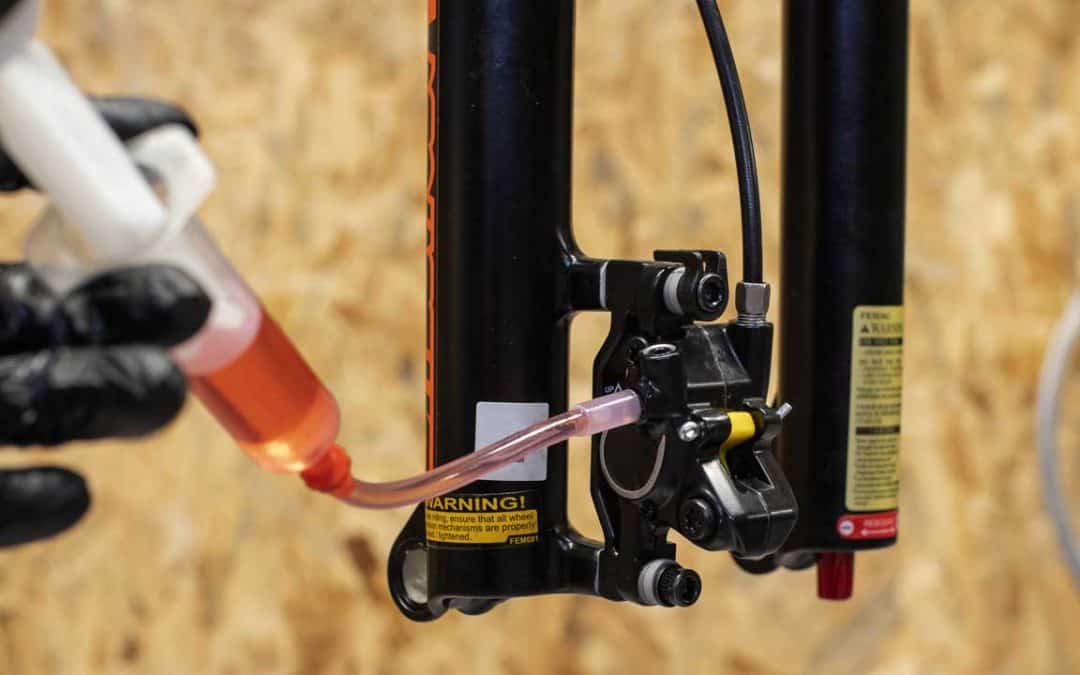 You likely enjoy riding at speed. I know when I ride, I like to ride fast, and sometimes that means I need to brake quickly too. However, when to bleed mountain bike brakes was something I wanted to know, as I had never run with them before.

Hydraulic braking systems on mountain bikes will start to feel spongy and ineffective. Given that hydraulic brakes are far more accurate than cable brake systems on bikes, the spongy feeling is a tell-tale sign that it is time to bleed your mountain bike brakes.

There are a few possible reasons why your hydraulic brakes might seem to require a brake bleed. I’ll go through the basics and detail why you should address the different symptoms or signs. But, first, we’ll go over the basic concepts of brake bleeding, so stay tuned because we’re about to get this bike rolling.

When To Bleed Mountain Bike Brakes

The primary reason to replace your fluid is a spongy or weak brake action. However, there are a few other scenarios when you should replace your hydraulic brake fluid. Let’s take a look at all the scenarios that result in a required brake bleed.

As mentioned above, the most common scenario to require a brake bleed is a spongy or mushy feel in the brake lever. The hydraulic brake systems are far more accurate than cable, so any sponginess is a dead giveaway that the system needs service.

The usual culprit is air in the brake system. Air can sneak in through wearing or aging seals; when you crash your bike, even just a slightly loose bolt or component can cause a tiny air bubble to sneak into your brake system. Air is the number one cause of spongy feeling brakes and thus the number one reason why you may need to flush or bleed your hydraulic mountain bike brakes.

Grinding Or Friction Feeling In Lever

Sometimes your hydraulic brakes may feel like there is grinding or friction in the brake lever. When this occurs, it’s a wise move to inspect all components and flush the brake fluid thoroughly.

By flushing the brake fluid, you can inspect it for any metal shavings or debris – tell-tale signs of internal damage to either a seal or mechanical components. This scenario is common after crashing your bike and having the lever take a hit.

Any time you flush or change the hydraulic oil for a thorough inspection for damage, or even just as a part of routine maintenance, you’ll need to bleed the brake lines to remove any air that remains in the system.

There is a high chance air has made its way into the brake system when there is leaking brake fluid. Also, if a seal is damaged, debris may have entered the system.

The source of the leak will need identification and any damaged components replaced. Whenever there is a hydraulic system leak, air will inevitably enter the system, and a brake bleed will be required.

Part replacement within the brake system should always be accompanied by a brake flush or brake bleed, depending on which parts are being replaced.

One standard part to replace is the hydraulic oil lines that run from the lever to the brake. These lines can become brittle and crack over time. The lines may also become damaged or pinched during a fall.

If replacing any component that opens the closed hydraulic brake system, you will need to either flush or bleed the mountain bike brakes or potentially do both actions.

Similar to a leak, opening the hydraulic system to replace a part will introduce air to the system. Again, you must perform a brake bleed to remove air from the system, or the brakes will either feel spongy or be ineffective.

Mechanic’s Tip: When I replace my pads, even if they aren’t a part of the closed oil system, I’ll either bleed my brakes or even do a full flush. I’ve noticed that a fresh brake tune-up improves my bike performance considerably.

When I worked in the mechanical field, I found that hydraulic lines last about five years. However, after five years, there is noticeable cracking of the outer sheath on the hydraulic line. It is because the rubberized materials become brittle over time, and the system will start to leak.

Hydraulic oil system seals also wear and degrade over time. The most noticeable symptom is an oil leak. However, if you are an avid biker, you should set a calendar reminder to do a brake flush at least once a year and likely do a brake bleed every six months or more if you bike a lot. (source)

I’ve had friends who used their mountain bikes to commute to and from work. They would bleed their brakes about once every two weeks. Again, it depends on how often your ride, and for how long, and how treacherous the ride is – are you smashing around a forest trail with roots and rocks or a Sunday cruise on the smooth pavement?

Every braking system has its own specific and detailed process that fits the manufacture of the parts exactly. Therefore, I won’t go into which bolt to undo and so forth, but I will talk about the basic concept.

When you bleed your brakes, the idea is to open under control two ends of the hydraulic brake system. Then, the fluid will be pulled and pushed back and forth between the two points to release air bubbles trapped in the system’s nooks and crannies.

Once all air has been removed, the system is topped up and sealed.

There are, as mentioned, several methods to achieve the result, and depending on which manufacturer, the methodology may differ for best results. Consult your brake manufacturer for model-specific bleeding instructions. Here are a few of the more popular references:

I love having a Bike Hand mechanic stand in my garage. It makes it so much easier to work on my bike. I can’t imagine trying to do a brake bleed crouching down by the floor. So if you want to spare your back, make repairs more straightforward, and stop the frustration of having to lift the bike each time you need to turn a wheel, then grab yourself one of these stands for your bike repairs.

Take a look at my video where I show you the Bike Hand Repair Stand and give you all the juicy info you want about it.

There are several kits out there, and most are geared towards your specific brand. I’ve got Shimano on one of my bikes, so I picked up a Shimano universal bike hydraulic brake bleed kit. If memory serves, it was less than $40, and I’ve used it at least a dozen times now – so it’s very worth having one of these kits from my experience.

So Much More to Learn About Disc Brakes – Read More