What Is a Bike Dork Disc and Do I Need It? 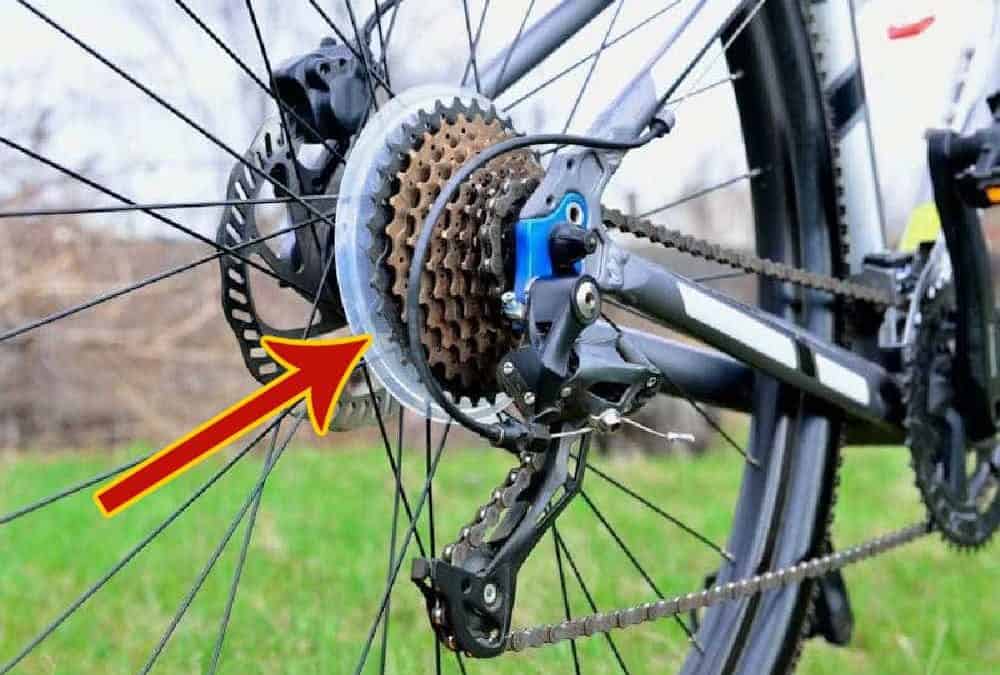 A bike dork disc is a bike component that you may not have heard of before now. Still, almost everyone who has owned a bike has had one at one time or another. While some know what dork discs are, other bikers do not know their purpose and importance.

A dork disc is a plastic material that prevents the chain from hitting the spokes and damaging it. Some bikers say it is no longer essential as modern derailleurs are now better than the older models. Meanwhile, others think that this component is still necessary to prevent damage to the spokes.

What Is a Bike Dork Disc?

When you purchase a new bike, you may see a plastic disc that does not exist on popular bike models that you see on the internet. This bike part is the bike dork disc, a part that you will often see on entry-level bikes.

Many beginners on bikes ignore this disc. On the contrary, some bikers wonder what it is and what role it plays on a bike.

It leads us to the question – what is a dork disc?

A dork disc or a pie plate or spoke protector is a disc you will find between the rear wheel and the largest cog of your bike. On modern bikes, a dork disc usually consists of a plastic material. On the other hand, bikes made in the early 80s used a chrome material.

Bike manufacturers designed the dork disc to prevent the derailleur from passing through the lowest gear and damaging the rear wheel. Basically, the disc protects the gears to prevent bikers from losing control of the bike; hence the name spoke protector.

In addition, this plastic disc prevents the chain and cassette dirt and grease from getting to the other components of your bike.

Moreover, the bike industry calls it a dork disc as it becomes an unnecessary part of the bike once you adjust the rear derailleur. (source)

DIY MTB Pro Tip: If your rear derailleur is properly tuned you’ll never have to test if a dork disc will keep your spokes protected. Read -> How to Adjust the Rear Derailleur

What Does a Dork Disc Do?

The way a bike dork disc work is relatively straightforward. From where it sits, it serves as a barrier that deflects the chain and rear derailleur from colliding with the rear wheel’s spokes.

Suppose your bike’s derailleur is not set correctly. In that case, it will pull the chain laterally, which leads to misalignment and chain dropping.

This chain misalignment causes the gear to shift involuntarily. For instance, shifting to your smallest gear may cause the derailleur to shift past the biggest gear, causing the chain to fall off your bike’s spinning wheel. Such can cause accidents, so dork discs are there to prevent this issue from happening.

A bike dork disc is also present on bikes to prevent the chain from hitting the spokes if it detaches from the gear. But if the chain hits the spokes, more problems can arise. This issue could also damage your:

Your bike’s dork disc prevents these problems by acting as a barrier that prevents the chain from digging into the spokes and damaging the wheel.

As mentioned, preventing the contamination of the brake pads and the brake rotor is also another job that a spoke protector does. When dirt gets to your bike’s brake pads, they become very noisy to operate. The brake pads also lose their efficiency, which can cause problems and accidents. (source)

Is a Dork Disc a Necessary Bike Part?

Whether a bike dork disc is necessary or not is a constant debate among the biking community. According to many riders, a dork disc is no longer as essential as they were back then. On the other hand, some cyclists claim that this bike part still serves an essential purpose of protecting the spokes.

Modern bike derailleurs work better than older models. For this reason, they shift from one gear to another more accurately. As a result, there is a lesser chance of the chain slipping suddenly and damaging the other parts of your bike, thus negating the need for a dork disc.

Some cyclists also say that performing regular maintenance on the derailleur will prevent malfunction, so you will no longer need a spoke protector. However, that does not mean that chain slipping and spoke damage are entirely impossible.

Similarly, dork discs also became better along with the modernization of bikes. This bike component became smaller, so it no longer affects the overall appearance of your bike. The improvement has a significant impact on how bikers perceive dork discs. For this reason, some bikers like keeping their dork disc intact.

That said, whether a dork disc is necessary or not depends on the bikers’ decision themselves. Keeping the dork disc installed is ideal if you want to ensure that something is protecting your spokes from potential chain slipping. Meanwhile, you can remove this component if you have faith in your own maintenance ability and the quality of your bike. (source)

DIY MTB Tip: Learn how to correctly shift gears in this article: Should you Pedal when Shifting Bike
Gears?

How To Remove a Dork Disc from a Bike?

Some people do not like the additional weight that a bike dork disc brings to their bike, while others do not believe it is necessary. If you have either of these reasons, you can choose to remove the dork disc from your bike.

Since a spoke protector consists of plastic material, many bikers think of breaking it apart without detaching it from the bike. But there is a much better and easier way of removing this plastic disc.

What you will need:

1. Remove the Rear Wheel Off of the Bike

The first step to removing a dork disc from a bike is to take the rear wheel off the bike. This step will make it easier to access the dork disc attachments.

After removing the rear wheel, place the splined cassette removal tool on your cassette’s lockring. Next, get your chain whip and wrap it around one part of the cassette. The chain whip will prevent the cassette from spinning freely while you loosen the cassette.

Get the adjustable wrench and hold the cassette removal tool firmly. It would be best if you spun the cassette lockring counterclockwise so you could remove it. If the cassette spins freely when you try to loosen it, check the chain whip and make sure you position it correctly.

After checking the chain whip, try removing the cassette lockring again using the adjustable wrench. If the lockring does not budge, try applying WD-40 to help it move.

After removing the dork disc, all you need to do is to twist the spoke protector. The twisting motion will remove the dork disc from its clips, allowing you to remove it from your bike.

Now that the dork disc is no longer a part of your bike slide the cassette back to where you removed it. Then, tighten the cassette lockring back using the adjustable wrench and position the rear wheel back on your bike. (source)

Dork discs are a bike component that bikers often debate. Some cyclists say it is an essential bike part, while others say modern derailleurs no longer need it. However, whether you should keep a dork disc or remove it from the bike depends on the bike owner.

A bike dork disc is a plastic material that protects the spokes from the chain if it suddenly slips. This way, the chain will not be able to damage the spokes and the other components of your bike.

If you have any questions or comments about this article, you can leave them in the comment section below, and I will do my best to answer them!

MTB Tools I Love and Recommend

I own each of these tools and only recommend things I own and use.