Are Ebikes Allowed on California Trails? [Laws, Maps and More] 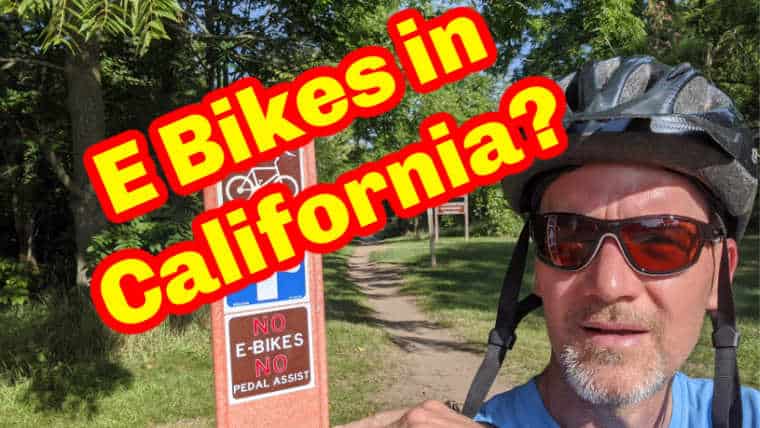 We had this amazing mountain biking vacation planned to California. And then I pulled my hamstring. Instead of scrapping the trip, I thought I had the perfect solution: rent an e-bike whose pedal-assist would help on climbs or when my injury was slowing me down. But then my buddy posed a question that stumped me: Are e-bikes even legal in California? What if the rules said I couldn’t ride it on trails like a “motor vehicle?”

Unlike some states, California law is clear that an e-bike is legal and not a motor vehicle. Still, that doesn’t mean you can hop on any trail like a traditional bike. Additional regulations may vary by city, county or trail management agency.

What Are California E Bike Regulations?

Defined by the California Vehicle Code, an e-bike, or electric bicycle, is “a bicycle equipped with fully operable pedals and an electric motor of less than 750 watts, separated into three classes.” While drunk driving laws apply, other motor vehicle regulations (driver’s license, insurance, registration) do not.

One interesting element to California’s laws regarding e-bikes compared to other states is its strict focus on the 3 classifications and accurate classification labeling. While most state laws divide e-bikes into classifications according to their speed capability, California takes it a step farther.

E-bikes in California must be labeled according to their classification, and if a user modifies it after purchase in a way that matches a different classification, the user must change the label. For more on e-bike classifications, and e-bike laws by state, visit Wikipedia (link: https://en.wikipedia.org/wiki/Electric_bicycle_laws#California)

In California, e-bikes are regulated like bicycles, and the same rules of the road apply.

The short answer is: yes. However, in Yosemite that simply means access to 12 miles of paved bike trails and use of paved roads. The Trump administration passed a resolution in August of 2019 allowing e-bikes in National Parks. Though there may be some variations between parks, generally e-bikes are permitted anywhere traditional bicycles are allowed. In Yosemite, where mountain biking is not permitted anyway. However, other California National Parks like Sequoia National Park, which has robust mountain biking trails, offers more ebike riding opportunities.

Head to BLM land! BLM ebike regulations were impacted by the same recent change affecting National Forests. Currently, the general rule is that any BLM trail open for motorized usage is also open to ebikes. Meanwhile, many trails designated for non-motorized use are beginning to welcome ebike riders, depending on the land manager. The overall Golden Rule is: Check local regulations for the specific trails you want to ride.

Searching for some great mountain bike trails in the Western USA? I’ve written some epic guides:

Do E Bikes Harm the Trail More Than Regular Bikes?

Part of the reason that e-bikes aren’t currently permitted in California State Parks is that park administrators plan to spend a year researching and analyzing the impact of e-bikes on trails. This will include effects on wildlife, conflict with other users and most notably: do they damage trails more than traditional mountain bikes.

While no one knows what the ultimate decision will be, early information looks promising. According to the San Diego Mountain Biking Association, a mountain bike advocacy group, “Growing evidence is showing that, when ridden responsibly, the impact of e-bikes is no greater than that of traditional bikes.

After much research, review of other policies and positions, and input from our members and the public, the SDMBA Board of Directors has developed a statement that reflects a broad consensus regarding e-Bikes and e-Mountain Bikes (e-bike), hereafter referred to as “e-bikes”.

SDMBA supports the use of Class 1 e-bikes on all traditional natural surface mountain biking trails, unless there are specific circumstances to prevent such use.” The organization also points out what I discovered due to my injury: “Cyclists have also experienced the benefits of this new technology, allowing them to continue to enjoy the outdoors when potential health and mobility challenges might otherwise prevent this activity.”

Routes and Trails for E Bikes in California

California is a big state. It’s hard to make route and trail suggestions without significantly limiting the geographic focus. If you’re planning your visit and route around mountain biking, here are some good ebike destinations:

If you already have your California vacation route planned and want to find e-bike trails along the way, two helpful trail finding resources are:

The mountain biking community, as well as hikers and other trail users have approached eMTBs on trails with reluctance and even some resistance. Regardless of the reasons, you can help minimize conflict and be a positive ambassador for the burgeoning sport of ebiking by practicing some simple trail etiquette.

By the way, my California mountain biking vacation was a success – pulled hamstring be damned! It took some extra research and planning ahead of time, but I found an abundance of trails that allow ebikes. We enjoyed fabulous weather, some incredible views, and I may have even found my new favorite sport.

David Humphries is the creator of DIY Mountain Bike. The most relaxing days involve riding my mountain bike to decompress after a long day. When not on my bike I can be found wrenching on it or casting a fly on a small mountain stream. Read more about David HERE.