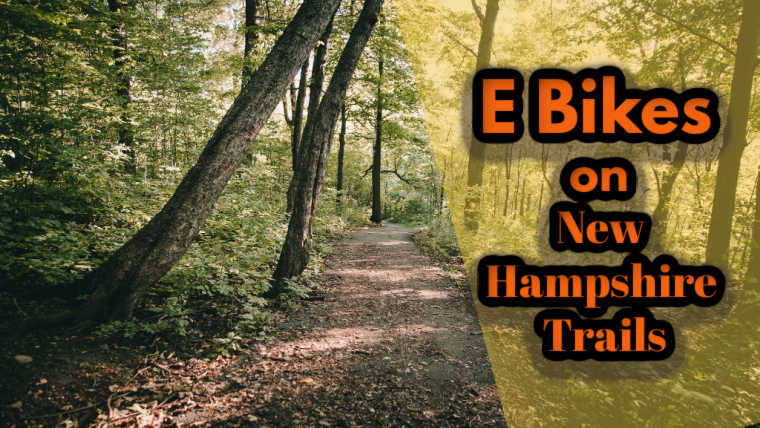 Just about every time I take my E-Bike out on the trails, especially if I’m bringing it to a new state, I will get someone asking me about if it is legal or not to be riding it on normal bike trails. I always check if E-Bikes are legal before I take a trip anywhere, so I wasn’t worried when I was asked again by someone I met on a trail on my recent trip to New Hampshire. Nevertheless, I can see why so many people ask me about this. The laws on E-Bikes are often either confusing or difficult to find. I’ve written this to help give a clearer picture of what the law is for anyone looking to ride an E-Bike on a trail in New Hampshire.

Is it Legal to Ride an E-Bike on a Trail in New Hampshire?

Yes. Under House Bill 148 the term “bicycle” includes E-Bikes. Furthermore, similar to many other states, E-Bikes have been classified into a 3-tier system which denotes what kinds of E-Bikes can be used on which trails.

In general, the State of New Hampshire defines E-Bikes as any motor-driven cycle whose speed attainable in one mile is less that 20mph. Moreover, the E-Bike must have both functional pedals and a motor that is no more than 750-watts (one horsepower equivalent). However, E-Bikes are still considered bicycles, so they do not require any additional licensing or registration as compared to regular mountain bikes.

What are the E-Bike Policies for New Hampshire?

As mentioned above, New Hampshire classifies E-Bikes using the popular 3-tier system which allows them to further classify and regulate trail use in regard to E-Bikes. The classifications of E-Bikes are as listed below…

Class 1: Bicycle equipped with a motor that provides assistance only when the rider is pedaling, and that ceases to provide assistance when the e-bike reaches 20 mph.

Class 2: Bicycle equipped with a throttle-actuate d motor, and that ceases to provide assistance when the e-bike reaches 20 mph.

Class 3: Bicycle equipped with a motor that provides assistance only when the rider is pedaling, and that ceases to provide assistance when the e-bike reaches 28 mph.

Based on these classifications, by New Hampshire law, both Class 1 and Class 2 E-Bikes may be ridden on all bicycle or multi use paths where bicycles are permitted. Class 3 E-Bikes, however, can only be ridden on roadways unless specifically designated by the relevant local authority or private landowner.

New Hampshire also has some specific regulations regarding E-Bikes that many states do not have. Firstly, you must be 16 years or older to operate a Class 3 E-Bike, unless the E-Bike is designed to allow for passengers, in which case persons under 16 can accompany a rider who is older than 16. Secondly, Helmets are requiring for all riders and passengers of Class 3 E-Bikes who are under the age of 18.

Despite these being state level regulations, any town, city, or state agency that has jurisdiction over a trail system still maintains the right to further restrict E-Bike usage. Whenever in doubt, it is always best to check with the respective land manager, agency, or property owner.

A helpful graphic released by the PeopleForBikes regarding E-Bike usage in New Hampshire can be found here: https://wsd-pfb-sparkinfluence.s3.amazonaws.com/uploads/2019/06/E-Bike-Law-Handouts_NH_compressednew.pdf

Can you Ride E-Bikes in New Hampshire State Parks?

According to the New England Mountain Bike Association, E-Bikes are not allowed on any non-motorized trail in the New Hampshire State Park system due to resolution 7301.18 which states that “the recreational use of electric and power-assisted bicycles on natural surface trails shall be managed within the same rules and regulations as motorized vehicles.”

This means that you can ride your mountain bike on any motorized trail, however many of the trails which non-motorized mountain bikes have access too are prohibited from having E-Bikes ridden on them. To be sure, it is best to contact the park office regarding if and then possibly where E-Bikes are permitted in the specific park.

Can you Ride an E-Bike on the Appalachian National Scenic Trail?

While many portions of the Appalachian trail are restricted only for hikers, portions which are contained within land managed by the National Park Service, such as the Appalachian National Scenic Trial in New Hampshire, do allow the use of mountain bikes and E-Bikes (Unless otherwise posted). This is because of a new set of regulations effecting all national parks enacted in 2020 which states that E-Bikes with two or three wheels as well as fully operable pedals and electric motors less than 750-watts are allowed everywhere bicycles are currently allowed.

Can you ride an E-Bike on Bureau of Land Management Land or National Forrest Service Land in New Hampshire?

While the Bureau of Land Management and the National Forrest Service both no longer categorize E-Bikes as OHV’s or mopeds, as they have previously, there is still no all-encompassing law which regulates whether or not they can be used on land managed by these agencies. In the meantime, while we wait for regulations to hopefully be put into place, the only way to know if it legal to ride an E-Bike on these properties is to contact the office of the specific forest, reserve, conservation, or park and ask them what their policy is, and whether or not they even have one yet.

Why Ride an E-Bike?

E-Bikes offer many advantages, when compared to regular mountain bikes for, a number of riders. Often the riders who will benefit the most from an E-Bike are those which are limited physically, older, or disabled. For these peoples an E-Bike is a way to ride more often and for longer distances. For some of these riders an E-bike might even be the only practical way that they can get out onto the trails.

However, those who are not physically limited can get just as much out of an E-Bike as anyone else. E-Bikes can be very fun and useful for those who are used to riding a regular mountain bike, and they are designed to be just as safe as a traditional bicycle. Whether it is just for a new experience, a different experience, or to allow you to get back on the trails even when you’re somewhat burnt out.

With an E-Bike you often get to see more of the trail while also not being overly inhibited by the physical strain that a long mountain bike ride can have on a rider. They don’t replace traditional mountain bikes for many people, I know they don’t for me, but they are still a ton of fun to ride and very interesting when you think of them as something different that regular mountain biking.

Challenge Yourself, and Most Importantly Have Fun!