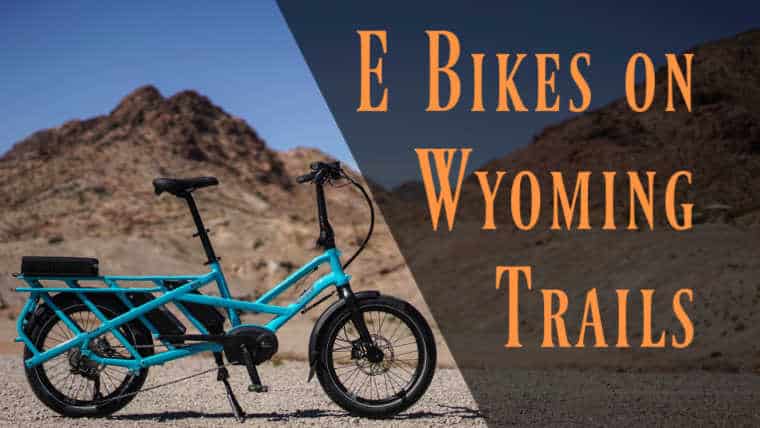 I bought myself an E-Bike a couple of months ago and love riding it on the trails that I used to take my mountain bike on. I liked it so much that I decided to take it on my trip to Wyoming last month, in place of my mountain bike. When I got there, I didn’t have any problems, but one guy did come up to me and warn me about making sure that it was legal to ride because he had heard a lot of places have different rules for E-Bikes. I thanked him for letting me know and looked it up later, it hadn’t occurred to me that an E-Bike would be regulated differently than other mountain bikes. Thus, I wrote this to answer that question for anyone looking to ride an E-Bike on Wyoming trails. So…

Is it Legal to Ride and E-Bike on a Trail in Wyoming?

In 2019 Wyoming’s governor, as well as the governors of 30 other states, signed a three-tier E-Bike law which recognizes E-Bikes as bicycles and allows E-Bike riders to use the same trials and paths that other bicycle riders currently enjoy.

This legislation was modeled after a proposal from the Bicycle Product Suppliers Association and PeopleForBikes which implements a 3-class system of regulation which separates E-Bikes based on top speed, design, and federal regulation. This system allows the majority of E-Bike riders to use the same paths and trails that non-motorized bike riders currently utilize.

What are the E-Bike Policies for Wyoming?

As previously describes, E-Bikes are regulated by a three-tier classification system which has also been implemented in many other US states through an effort to standardize laws regarding E-Bikes across the United States. All E-bikes which do not fall into one of these three classes are legally seen as either motorized vehicles or mopeds and are regulated by different laws. The three classes of E-Bike determined by this law are as follows.

Class 1: An E-Bike equipped with a motor that provides assistance only when the rider is pedaling, and that ceases to provide assistance when the E-Bike reaches 20 mph.

Class 2: An E-Bike equipped with a throttle-actuated motor, that ceases to provide assistance when the E-Bike reaches 20 mph.

Class 3: An E-Bike equipped with a motor that provides assistance only when the rider is pedaling, and that ceases to provide assistance when the E-Bike reaches 28 mph.

State law allows Class 1, Class 2, and Class 3 E-Bikes to be used on bike paths outside of state parks and other state managed land (bike paths on road and such). However, local governments have the right to further regulate E-Bike Usage based on their respective Class, so it is best to check local laws when in doubt.

Wyoming State Parks currently allow all class 1 E-Bikes on their non-motorized trails and all other E-bikes on their motorized/combination trails. Federal land allows E-bikes up to 750-watts to be used, with the one exception being National Forests which don’t yet have an all-encompassing policy. If you would like to ride an E-Bike in a National Forest I recommend calling the office of the respective forest and asking about their specific rules and regulations. It’s always better to be safe than sorry!

For more information regarding this legislation visit: https://www.wyoleg.gov/Legislation/2019/SF0081

Can you Ride an E-Bike in Yellowstone National Park?

Based on a new set of regulations effecting all national parks enacted in 2020, E-Bikes with two or three wheels as well as fully operable pedals and electric motors less than 750-watts are allowed everywhere bicycles are currently allowed. The use of E-Bikes is still prohibited anywhere that bicycles are prohibited, and all other regulations that apply to bicycles also still apply to the use of E-Bikes. The most important of which is speed regulations, which with the assistance of an electric motor an E-bike can often exceed.

For information regarding trials and paths open to bicycles in Yellowstone National Park visit: https://www.nps.gov/yell/planyourvisit/spring-fall-bicycling.htm

Do E-Bikes Harm the Trail More Than Regular Bikes?

Any bike can damage a trial if used improperly and recklessly, however, E-Bikes which fall into one of the three classification listed above pose no greater risk to the heath of a trail than any other mountain bike. These E-Bikes often do not exceed speed or torque measurements which are conceivably achievable from strong riders of standard mountain bikes. Moreover, trails which have been deemed unable to handle higher class E-Bikes (for whatever reason), such as Class 3 E-Bikes, are still able to restrict the use of these E-Bikes. One example of this is trials in State Parks which, in Wyoming, only allow Class 1 E-Bike usage.

There is an argument to be made that E-Bikes can harm the general trail environment and atmosphere due to inexperienced riders being able to go further faster. However, this is a problem for all trails that allow the use of bikes and comes down to the personal responsibility of the rider to not damage the experience of other people using the trails.

Don’t Let Anything Keep you Off of the Trail!