Are E-Bikes Allowed on Colorado Trails? [Learn the Laws] 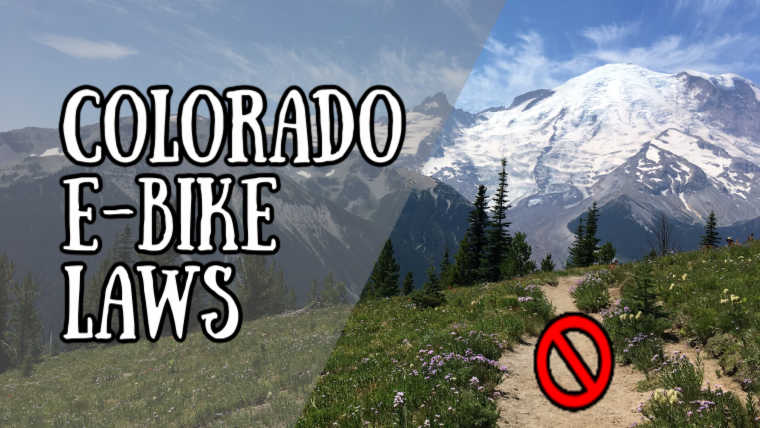 Whenever I go to a public trail with my E-Bike I usually get one or two people asking me questions about how it works and how much it cost, however I also seem to always get at least one person warning me that it might be illegal to ride on the normal trails because it has a motor. With new technologies that become popular, regulations can be passed and altered multiple times within just a few years before being settled on. As a result, it can be difficult to stay up to date and know what’s going on. I wrote this to answer those questions for anyone looking to ride an E-Bike in Colorado.

Is it Legal to Ride an E-Bike on a Trail in Colorado?

Yes. Like many other states Colorado has recently passed a 3-tier E-Bike classification law which allows many E-bike riders to use the same trails that bicyclists currently ride on. However, specific local, state, and federal regulations still apply.

Local laws have the final say in whether or not an E-Bike can be legally ridden on any particular trail or trail system, as well as on the road. Thus, it is always best to contact the relevant authoritative body before planning a trip. However, there are also multiple policies which are universal across the state. These laws usually pertain to state and federally managed land which benefits from a more-or-less centralized decision-making structure.

What is the E-Bike Policies for Colorado?

As stated above E-Bike usage in Colorado is based off of regulations which pertain to a 3-tier classification system that was put in place in 2019. This law is meant to recognize E-Bikes as bicycles, rather that motorized vehicles, while still regulating their use within reason. The three classes of E-Bike, as defined by the law, are as follows…

Furthermore, in general an E-Bike must meet these three criteria: it must have two or three wheels, it must have fully operable pedals, and its electric motor must not exceed 750-watts of power (roughly 1 horsepower equivalent).

Given these distinctions, both Class 1 and Class two E-Bikes are allowed identical access to Colorado Parks and Wildlife land as non-motorized bikes. However, Class 3 E-Bikes are only allowed on roadways and designated bike lanes.

Additionally, similar to Colorado Parks and Wildlife regulations, Colorado State Parks also allow Class 1 and Class 2 E-Bikes on roadways and bike lanes as well as on multi-use trails. All of which, are also open to non-motorized bicycles as well. However, Class 3 E-Bikes are only allowed on designated roadways and designated bike lanes.

For more information regarding E-Bike classification and usage in Colorado visit: https://cpw.state.co.us/thingstodo/Pages/E-Bike-Rules.aspx

Looking for more MTB in Colorado?

Do I need to Register my E-Bike in Colorado?

E-Bikes which fall into one of the three described classifications above are considered bicycles and not Off-Highway-Vehicles or OHVs. Because of this, much like with a regular mountain bike, you do not need to register your E-Bike.

If your E-Bike does not fit into one of the above-mentioned classifications, then it is what is commonly colloquially referred to as a “Class 4” E-Bike. Essentially, this classification means that the E-Bike is considered a moped/motorized vehicle. This type of E-Bike has to be registered and can usually only be used where other mopeds/motorcycles are allowed. Although, If it can be considered an OHV, then it still must be registered and properly stickered as with other OHVs.

Can you ride an E-Bike in Mesa Verde National Park?

Due to the fact that National Parks are owned and operated through the federal government, rather that the state government, no matter which state a national park is located in they all have the same overarching E-Bike regulation (subject to individual discretion based on factors such as location and special circumstances). This regulation states that E-Bikes with two or three wheels as well as fully operable pedals and an electric motor less than 750-watts are allowed everywhere bicycles are currently allowed.

That being said, make sure that you still understand and follow all of the laws and regulations which apply to regular bikes in the national park, as, they still apply to E-Bikes. One of the most common laws which E-Bike riders unintentionally break is the speed limit. Electric motors make it easier to reach an maintain speed which, in some area, may actually be illegal.

Can you ride an E-Bike on Bureau of Land Management Land or National Forrest Land in Colorado?

While the Bureau of Land Management no longer classifies E-Bikes and OHVs, the regulations regarding E-Bike usage vary from agency to agency as well as from municipality to municipality. Unfortunately for both Bureau of Land Management properties and well as National Forest Service properties, there is no overarching law or regulation that can tell you if it is legal/allowed to ride an E-Bike on these properties. This means that you are going to have to contact the office of whatever place you plan to ride at and ask them individually to be sure of their policy regrading E-Bikes.

Only Class 1 E-Bikes are allowed on the city’s trails system. Furthermore, only on their designated “Urban Trails” which are essentially their paved set of trials. A list of the trials where you can ride your Class 1 E-Bike can be found here: https://coloradosprings.gov/ebike?mlid=34956

Both Class 1 and Class 2 E-Bikes are allowed on El Paso County’s primary and secondary regional trials. These are unpaved that connect neighborhoods and urban centers. E-Bikes are, however, not allowed in any El Paso County Park.

Whatever it Takes to get Back on the Trail!