Are E Bikes Allowed on Nevada Trails? [Laws and Trails] 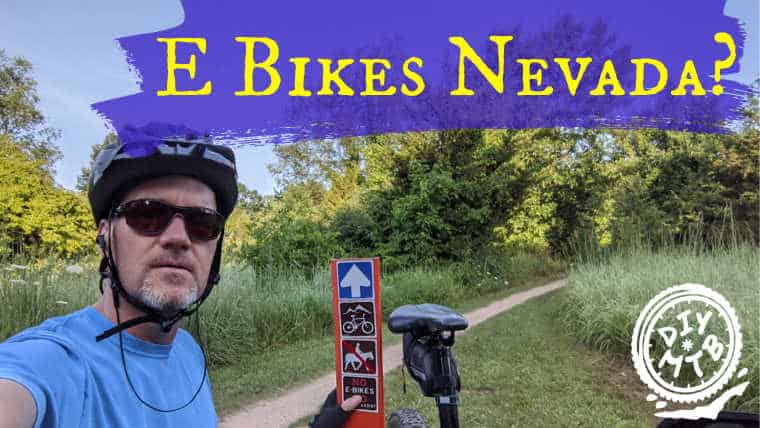 If you’ve ever been biking in Nevada, you know it has incredible scenery. But probably something else overshadowed your experience: It’s HOT. So hot, it’s sometimes hard to enjoy a bike ride. This is why, the invention of the electric bike – and the growing acceptance of e-bikes on trails – is so exciting! Now, we have a better chance to enjoy the scenery without succumbing to heat stroke.

But, before you fork over the money to buy an e-bike or plan a biking vacation to Nevada, you might want to know more about where e-bikes are allowed in Nevada.

Is it Legal To Ride an E Bike on a Trail in Nevada?

An e-bike is a two- or three-wheeled bicycle capable of speeds less than 20 miles per hour. In Nevada, e-bikes are allowed on most trails where bikes are permitted, but local or park-specific regulations can vary significantly.

To be classified as an e-bike by the state of Nevada, the bike motor must be less than 750 watts and capable of speeds no greater than 20 mph. Additionally, it must have pedals and be recognizable as a bicycle.

Electric bikes look like traditional bicycles but have an electric motor. Some Nevada laws for both mopeds and bicycles apply, though technically and e-bike is neither. The state does not require helmet use, liability insurance, a driver’s license or registration.

On roadways, e-bikes must follow all traffic rules such as signaling turns and staying to the right of the roadway except when turning left. They must have working brakes and at night, have a headlight, plus red reflectors on the back and both sides. Not surprisingly, riding an e-bike under the influence of alcohol or drugs is illegal.

Can you ride an E Bike in Lake Mead National Park in Nevada?

While a resolution in August of 2019 allowed e-bikes in all National Parks, that hasn’t happened immediately at every park. Some National Parks first had to study the impacts of e-bikes on specific trails and ecosystems, while others are still working on crafting their regulations. Currently, 385 National Parks have completed their evaluations and adjusted their policies.

To check out the regulations at the National Park you plan to visit ahead of time, use www.nps.gov.

Currently Nevada State Parks do allow e-bikes on all trails where traditional mountain bikes have access.

At the moment, e-bikes are welcome on all National Forest trails where “motorized use” is permitted. However, National Forests are also in the process of revising regulations governing e-bikes and will most likely become more inclusive in the near future. This is a fairly new technology, remember? It takes the powers-that-be awhile to catch up.

Because National Forests are managed by the Department of Agriculture, they weren’t affected by the same blanket regulation change in 2019 that’s opening up National Parks and State Parks to e-bikes. Still, they will likely find more ways to allow e-bikes in mountain biking opportunities or create e-bike-specific options.

Some Great E-Bike Rides in Nevada

Ok, there’s just no way around it. Summer biking in Nevada is hot. Even with electric-assist on your MTB, you’ll still most likely feel like you’re baking, and e-bike technology doesn’t offer any protection from sunburn!

Hence, the best time of year to bike in Nevada is October to April when the temperatures are lower. When riding this time of year, bring a rain coat and/or other warm clothes, especially at higher elevations where weather can change quickly and hypothermia is a possibility. And, no matter the season, always wear sunscreen.

Some Safety Guidelines for Riding eBikes in Nevada

If you’re familiar with general mountain biking safety guidelines, there are a few tips relevant just to e-bikes:

If you’re new to recreational biking, here are some helpful tips:

There’s More to Do in Nevada Than Gamble!

So, the next time you get an invitation to take a trip to Vegas – for a business conference, a bachelor party, anything – and your instinct is to groan… remember there’s more to do in Nevada than sit around in a casino and drink. Lake Mead and Bootleg Canyon are only a short drive away. It might be the perfect opportunity to try out e-biking in Nevada. And then enjoy an ice-cold drink and a dip in the hotel pool – you’ve earned it!